When Amanda and Preston struggled to grow their family, the newlywed couple had reason to suspect the issue was a physical one. Amanda had suffered an ectopic pregnancy years earlier, causing her to lose one of her two fallopian tubes...

When Amanda and Preston struggled to grow their family, the newlywed couple had reason to suspect the issue was a physical one. Amanda had suffered an ectopic pregnancy years earlier, causing her to lose one of her two fallopian tubes, and they worried a problem with the remaining tube could be the reason they weren’t getting pregnant.

Thankfully, Amanda's fallopian tube was clear. So she and her husband began exploring fertility treatment options, only to be discouraged by the cost of IVF — until an internet search led them to CARE Fertility and the more affordable effortless IVF® option.

Amanda shares how painful disappointment, fear, and reservations gave way to hope, fortitude, and the outcome the couple desired all along — a healthy baby!

Preston and I met in December 2011, after I returned home from a tour in Afghanistan. My cousin introduced us, and we hit it off immediately. We had both been married before, and I had a son from my previous marriage, but Preston had no children of his own. After tying the knot in May of 2016, we decided to start actively trying to conceive, but nothing was happening. It had already been a year since we stopped using birth control, so we were growing concerned.

I had suffered an ectopic pregnancy in 2010, which caused me to lose my right fallopian tube. So I went to get tested to see if my remaining fallopian tube was blocked. But the dye test revealed it was not blocked, so we continued to try on our own.

Three years passed before I finally conceived, but we soon faced disappointment again—twice.

We finally conceived in May of 2019, but unfortunately, that pregnancy ended in a miscarriage at 5 1/2 weeks. We were sad, but it gave us hope — I was able to get pregnant!

After that, every month we didn’t conceive again, we toyed with the thought of pursuing IVF. But the cost was just too steep, and we were holding out hope that a successful pregnancy would happen without it.

In December of 2019, Preston and I conceived again, but that one ended in another ectopic pregnancy at six weeks. This time, with emergency surgery, we were able to save my left fallopian tube and my OB-GYN gave us a 30% chance of conceiving again with that tube.

Thirty percent is better than zero — but risking another ectopic pregnancy wasn't something we wanted to do.

It was after my second ectopic pregnancy and emergency surgery that we decided right then and there — if we wanted a baby, IVF would be the way to go. 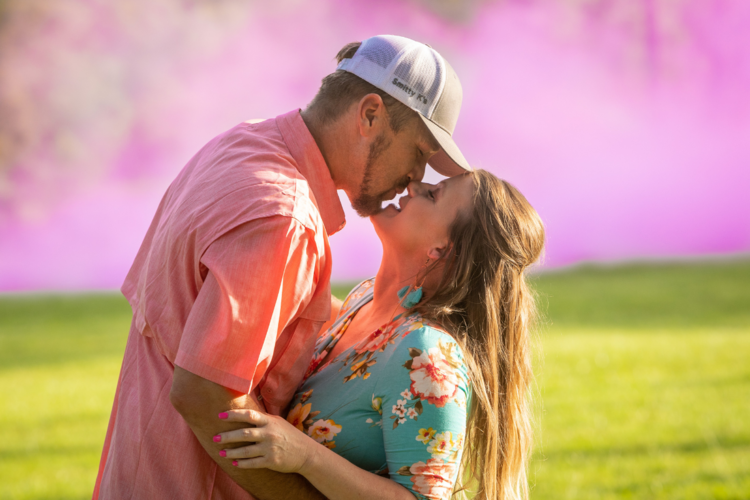 However, we still worried about the cost of IVF and the possibility that we could spend that much money only to face even more disappointment. So I kept researching different options.

Honestly, I don't remember how I stumbled across effortless IVF® and the CARE Fertility website, but I know I was searching online for more affordable IVF® options and that's how I found out about the procedure.

Right away, I knew effortless IVF® was a good solution for us for two reasons:

1. The price was significantly lower than traditional IVF.

2. Incubating the embryos inside of my body rather than in a lab appealed to us as well.

Being cost conscious, effortless IVF® made the choice easier.

We were able to see the price of what everything would cost in advance because it was published on the website. Unlike other providers, we were able to go into our appointment knowing exactly what we would be paying instead of not finding out until after consulting with the doctor. This offered the peace of mind we needed to move forward quickly.

We decided effortless IVF was the way we wanted to go!

But even though we were excited about pursuing effortless IVF®, the process challenged us. All of the shots and different procedures were scary.

Luckily, I had the support of our family and close friends. The drive to the clinic was three hours one way, and when my husband couldn't make it, my best friend of 25 years would come with me. In the beginning, the process didn’t go as smoothly as we’d hoped.

Right after we signed up, 2020 and coronavirus hit, so we had to wait until April to even be able to start testing and egg retrieval.

Then, with the first round’s medication protocol, I didn't produce many eggs. We had three embryos but only two of those were good. We transferred one embryo in the fresh cycle and the second one in a frozen cycle but both failed.

Next, we decided to do a freeze-all cycle with a different medicine protocol. Out of that cycle, we wound up getting five excellent-grade embryos. The first transfer failed as well, but the second one worked.

It actually was kind of a shock because the single embryo split in the beginning, and there were two sacs but three fetuses! The sac containing the two embryos stopped growing by nine weeks, but one thrived. We finally had a successful pregnancy and couldn’t be happier.

If I could go back in time, I wouldn't have let the cost scare me from starting the journey sooner. Being pregnant at 36 is no joke!

My advice to others considering IVF would be to not let the cost or being scared of the outcome prevent you from trying. And if it doesn't work at first, don’t be afraid to try and try again!